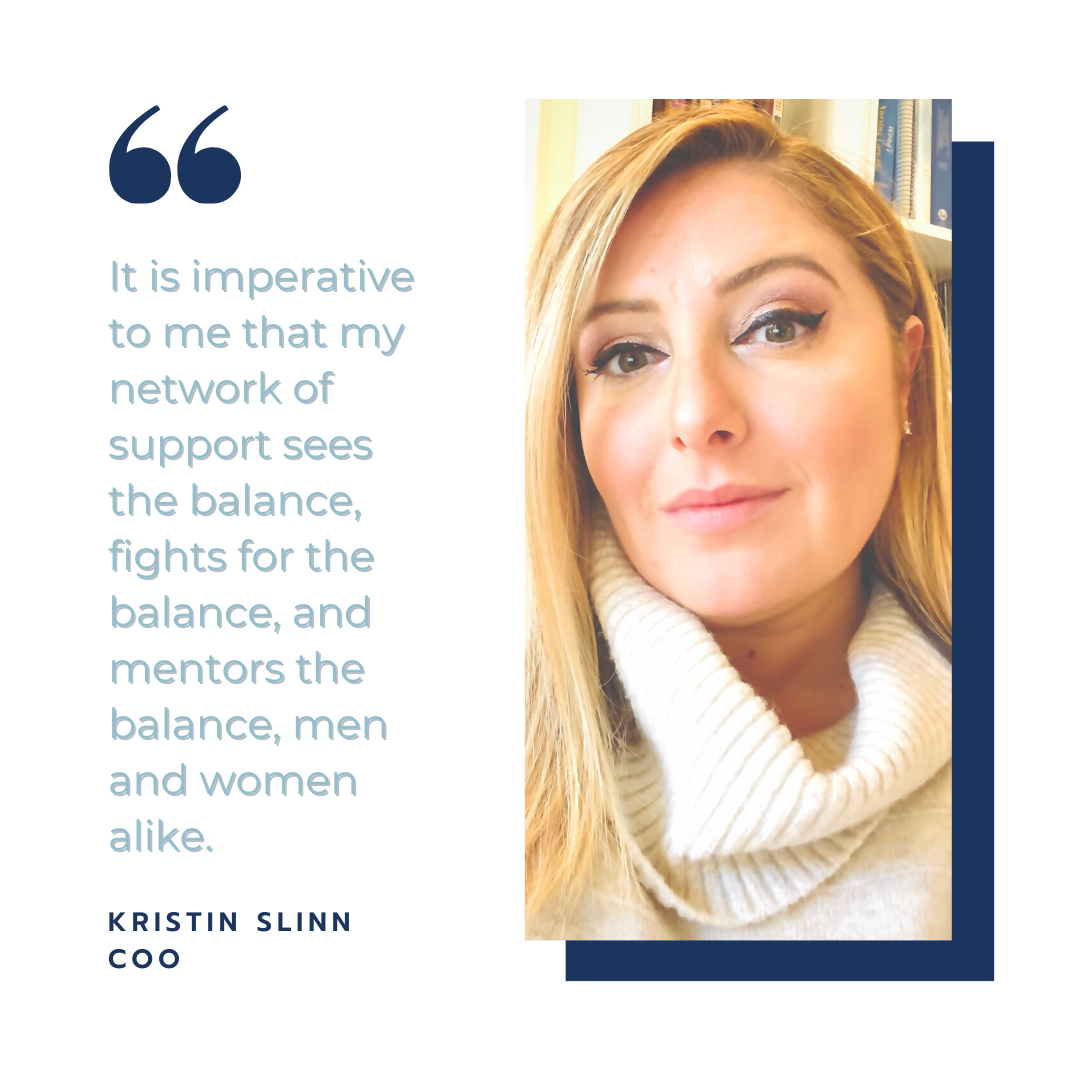 In our final conversation with Reborn Clothing Co.’s COO, Kristin Slinn, regarding her thoughts about this year’s International Women’s Month theme, #ChooseToChallenge, we learn about what Kristin has experienced as challenges both in and out of the office and what method’s she deployed to combat those obstacles that have prevented being heard where critical.

What does the 2021 International Women’s Day slogan, #ChooseToChallenge mean for you in your work life?

My mother bucks the status quo in her industry as a leading Ph.D. chemist in an almost entirely male-dominated world, and she taught me to set goals and go for them, no matter what!  Her influence of seeing things from an equal footing has led me to be the strong mother, wife, and businesswoman I am today.  But don’t be fooled, it has not been easy, and the reality is that even in 2021, there are ever-present double standards that make things challenging as a female.  The pandemic brought the fundamental role that women balance in society to the surface between homeschooling, working-from-home, household duties, and more.  We were going from the boardroom to the laundry room to the classroom all at the same time, and it presented a significant shift in priorities to challenging the balance of roles.  For me, #ChooseToChallenge has everything to do with striving for balance in all areas and aspects of life.  It is the balance of a feminine voice in a meeting, a shared and balanced set of job responsibilities and equal status and pays, and a balance of home and family.  The most powerful tool that I have in my toolbox is my voice!

What barriers have you faced, as a woman, in becoming successful in your field? How did you overcome them?

Sometimes it comes down to the minor pieces of being able to get answers to do your job appropriately.  Within manufacturing, there are interesting barriers that I have come up against.  In one of my first jobs, I realized that if I slightly changed my name from Kristin to Chris in emails, I got quicker responses and more direct answers to my questions from vendors.  There was a level of respect that Chris was getting because I was perceived to be a man.  They were surprised when I was a young female greeting them during their visit to the office.  I have also been told by a former boss that I needed to put smiley faces 😊 and exclamation points! In my emails, I come off “softer around the edges” and have tested with a fellow male co-worker to send out the duplicate emails to see if we would get different responses.

Unfortunately, I was reprimanded for being aggressive and demanding, where my coworker was praised for being assertive and driven.  We then tested the same theory with my extra smiles and exclamation points, and I was perceived as “cheerful and softened.”  Mind you; there was no change in the message; the end of the sentence was just now flowery.  I was often asked to take on additional responsibilities with the promise of compensation to come down the road, which was nothing more than a promise.  All the while, fellow male colleagues would have fewer responsibilities and higher salaries.  With age being a significant factor in my ability to speak up and learn the difference in these inequalities, I could not recognize the power of my voice.  Being silent is perceived as acceptance and allowance in my worth devaluation as a solid, strong, and effective businessperson.

Over time, I have learned that I had to become comfortable with my voice, which was not easy!  It took me time to learn how and when to use it, which led to some tough life lessons, bumps, and bruises.  I had to learn that people were afraid of a woman’s voice, and they labeled that with fear when it was their insecurities and intimidations.  I realized that I have to use this tool skillfully and have certainly made mistakes in that judgment as I learn.  My voice must speak with integrity, and I must make sure that I use it.

In your opinion, how do our individual actions, conversations, behaviors, and mindsets have an impact on our larger society?

Assumptions are the most significant factor here.  Assuming that the male is the breadwinner or the woman is the cook in their home or takes care of the kids while the man goes to work, a natural assumption is present today.  Also, assuming that the woman will be quiet and timid or that they will not speak up if you pass them by for a raise, promotion, or added responsibilities, only adds to the reinforcement of silencing rather than challenging.  Having women show all the data behind their work and not trusting their skill level while taking a man at their word is an assumption of ability and comprehension.  The change is when women use their voice, it has to be met with respect and room for voice and discussion.

How important is it for women to lift each other up, and what does that mean to you?

In my career and I have worked with women that tear each other down, and women uplift each other.  I can tell that you that I much prefer the women that encourage each other!  We need to make space for each other and support each other’s voices in the boardroom and at home.  It is imperative to me that my network of support sees the balance, fights for the balance, and mentors the balance, men and women alike.  I have a wonderful family that supports my voice, and a fantastic husband that never silences me (although sometimes I am sure he wishes he could), and a group of friends and colleagues that make space in the room for my voice and meet me with respect to having an opinion.