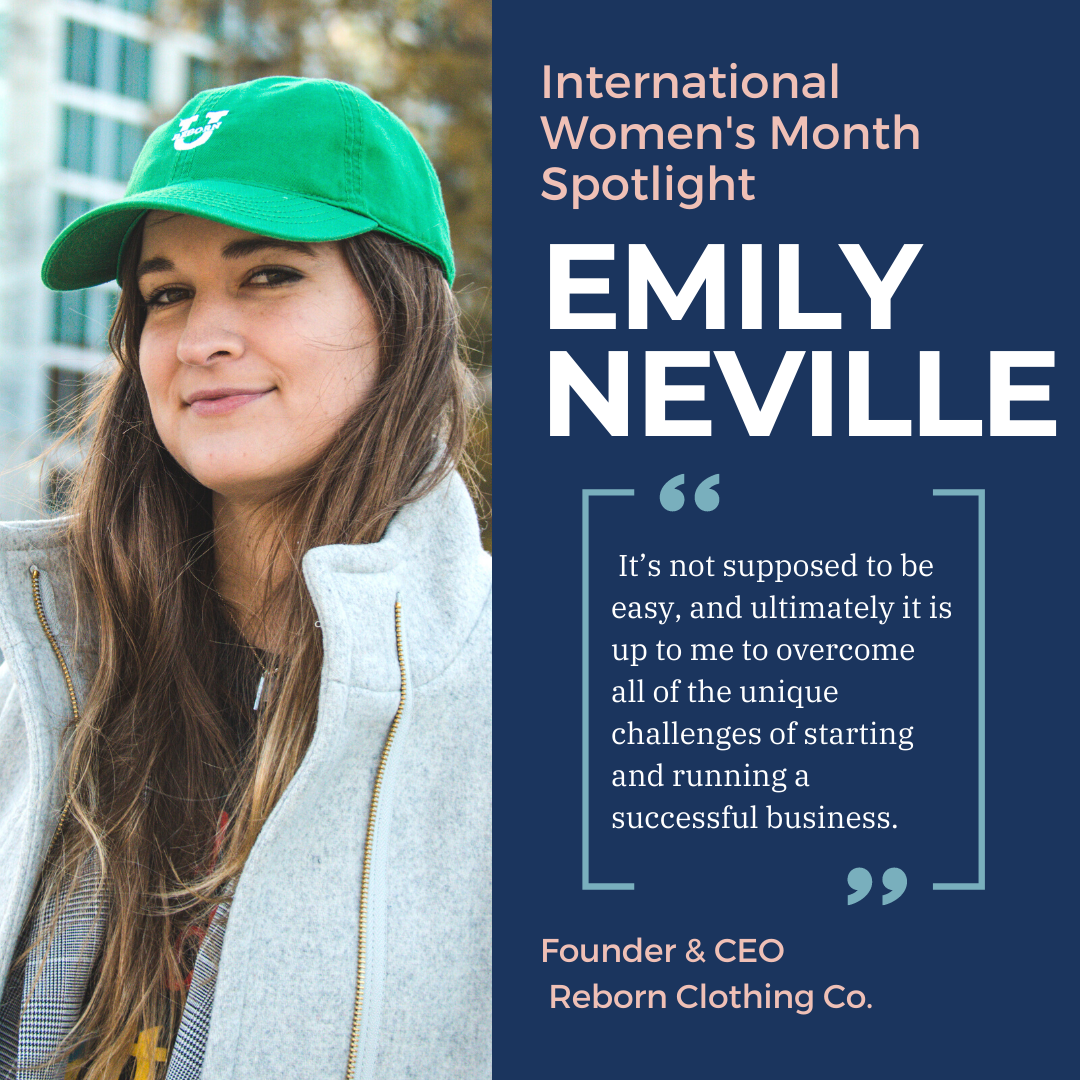 This conversation is one that we’ve been asked so much about since we started this series a few weeks ago. Emily Neville, Reborn Clothing Co.’s CEO and Founder has faced her fair share of challenges. And then some with incessantly working to create global change in reducing textile waste through upcycled solutions and doing that during a pandemic. But from what anyone who spends a few minutes with Emily will discover, vigilant pursuance is in her DNA. It will take a lot more than a global health crisis to derail her from her commitment to better what is broken in more ways than one.

What does the 2021 International Women’s Day slogan, #ChooseToChallenge mean for you in your work life?

Challenging the status quo can be pretty intimidating, especially in an environment where more people don’t resemble you than those who do. Since I’ve been involved in the business and textiles industry, I’ve been surrounded by male investors, business partners, other leadership, and advisors. In most situations, I am working with men in their forties or up, and as a young female entrepreneur, I’m always at least somewhat aware of the age and gender gap. In that sense, getting into this world has been a challenge, overcoming various barriers along the way with a determination that I won’t let my age or gender define my opportunity. I choose to challenge expectations, both internal and external because I believe that I can be part of a rising tide of more women in business and specifically in leadership roles calling the shots.

This is tough because I could say that as a woman, I’ve stood out and, in some regard, been seen as the next young female entrepreneur coming out of Raleigh and received a ton of support and encouragement (and I have). However, there is something called the female flattery trap – I think that there is a lot of excitement and interest around supporting minority entrepreneurs. However, the data shows that there is still a significant funding gap in providing capital. I have to make decisions around my time and ultimately try to sift through who is being helpful and who is more interested in saying they helped or entertained me.

Of course, there have been other more blatant examples of barriers and situations where I was talked over or shot down as being inexperienced or not “knowing what I was talking about.” Or perhaps spoke about in the room as what was best for my business instead of asking if I had thought through that strategy and why it did or didn’t work. I could go on; there have been times where I went to networking events, but “just the boys” were going out for drinks after, or where it was assumed I didn’t know financial terminology and then received surprised faces when I did, and so on.

These are barriers I will continue to need to overcome, and some of these things are inevitable as an early-stage founder. It’s not supposed to be easy, and ultimately it is up to me to overcome all of the unique challenges of starting and running a successful business. If it’s successful, it will be because of me, and if it fails, it will be on my shoulders. My mantra is, “The measure of a wo(man) is not how often (s)he gets knocked down, but how quickly (s)he gets back up.

No matter what, I am motivated to be the founder I need to be because that’s what I am. I’m a founder, I’m a CEO, and I just happen to be a badass woman, hopefully paving the way for the women behind me.

I’m often asked if I plan to “give back” throughout my journey by mentoring and investing. I often joke that all I want is to be hugely successful to invest everything back into more women, but quite frankly, that is what I plan to do, and my future husband can do what he wants with his own money. Sometimes inaction speaks louder than anything else. I think we have to ask ourselves as women what we’re doing to support one another, especially when we make it to the top of the elevator. Will we have the mentality that “she should struggle as I did” or help close the gap and lessen the path’s hardships?

We can also impact change with our words and our time. By telling a young female founder that all she has is a “lifestyle business” or that it’s “not investable,” you are 1) making it seem like those are negative things when in fact, all businesses have the opportunity to impact our communities and if you don’t need to bring on investment in exchange for the equity you go, girl! And 2) Do you have that authority? Couldn’t Nike or Life be Good to have turned out to be just lifestyle businesses? Shoes and shirts? Nothing life-changing, but look at them now.

Consider this: by having more women starting companies, investing in high-growth companies, and being promoted within companies, we’re not talking about just a qualitative shift, but an equitable shift. We’re talking about more women holding more wealth. That’s a powerful thing when we consider what the professional world looks like today in terms of childcare, health & wellness, and so on. What if instead of your gender being used as a reason against you, it was used as a reason for you?

I think that today as women, we’re competitive with each other because we’re used to there being limited “seats” for women on executive teams, or in C-level spots, on boards, and so on. I have to prove I’m better than the woman next to me to be taken seriously.